Their iconic On The Ball, City anthem, widely considered to be the world’s oldest football song still in use today, was adopted as early as the Canaries’ original formation.

City moved into their famous home, The Nest, in 1908 and played their first Football League game there a dozen years later when they drew 0-0 with Plymouth Argyle in Division Three South. Incredibly, there were just two goals in the first five matches held at the venue, with neither being scored by the home side.

It would not be until their sixth game that Norwich broke their duck at The Nest in a 1-1 draw with Bristol Rovers, before securing their first win there a fortnight later with a 2-0 victory over Reading.

They would be less goal-shy in 1930, when the Club produced a record league win by thrashing Coventry City 10-2 in Division Three South.

The 1933/34 season saw City lift the title after topping that division, thus securing promotion to Division Two, and a year later they moved into their current home of Carrow Road where their first game saw a 4-3 victory over West Ham United. 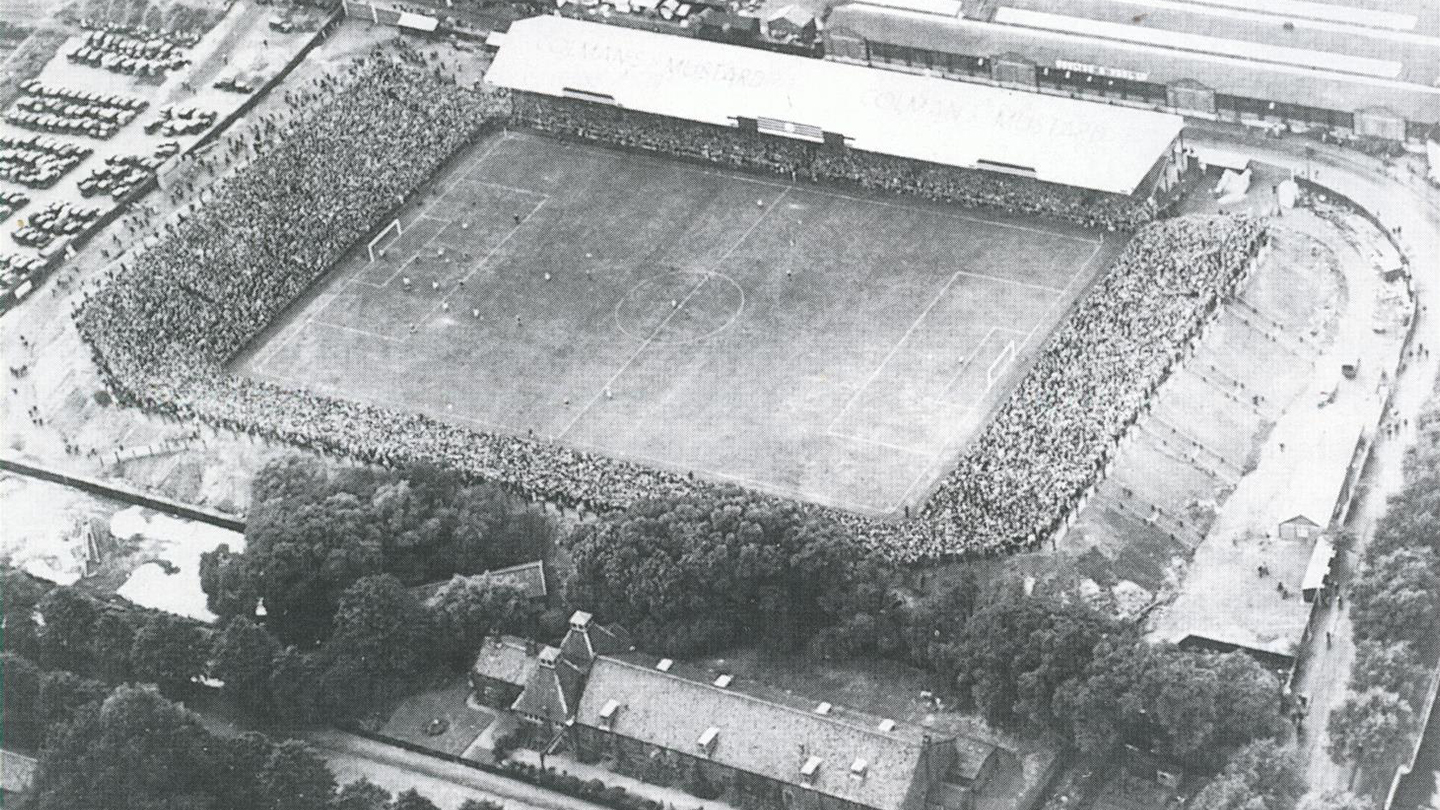 Between the 1940s and 1960s two notable individual records were set, with Ron Ashman accumulating a club-high total of 592 appearances between 1947 and 1964 while Johnny Gavin set the current record for most goals scored by striking 132 times in 338 games across two spells from 1949 to 1958.

The era of the former also coincided with one of the most famous FA Cup runs in the competition’s history, as Division Three South side Norwich defied the odds to convincingly beat Manchester United 3-0 in the Third Round ahead of eventually being beaten by Division One outfit Luton Town in the semi-final following a replay.

City lifted their first major trophy in 1962 when they won the League Cup by defeating Rochdale United 4-0 over two legs; being captained by the iconic Ashman in both matches.

A year later, a record-high attendance was set as 43,984 spectators packed into Carrow Road to watch Norwich take on Leicester City in the FA Cup sixth round.

The 1971/72 season saw Norwich top the second tier of English football for the first time, and they reached their maiden Wembley final the following campaign as they fell to a narrow 1-0 League Cup defeat to Tottenham Hotspur.

They would go one better in 1985, when they won the competition for a second time courtesy of a 1-0 victory over Sunderland which was decided by an own goal from Black Cats defender Gordon Chisholm.

Their route to the final itself was a challenging one, having trailed to East Anglian rivals Ipswich Town 1-0 following the first leg of the semi-final at Portman Road.

However, the Canaries levelled the scores on aggregate back at Carrow Road through John Deehan, and with time ticking down central defender Steve Bruce leapt highest to head home arguably one of the most famous goals in the Club’s history to seal the tie. 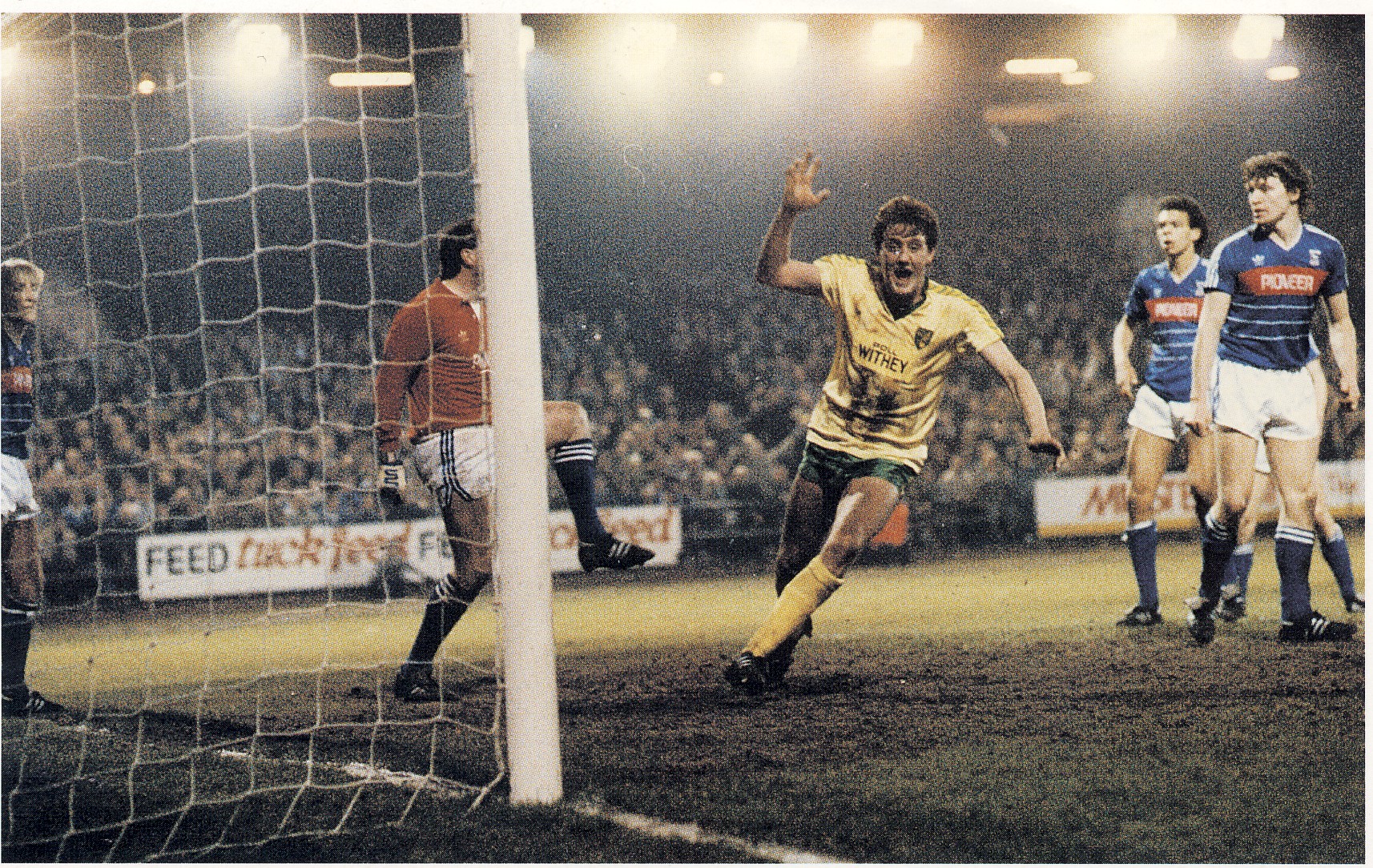 City would have been set for their first season in Europe off the back of their League Cup success, but on May 31, 1985, all English clubs were banned from continental competition indefinitely as a result of the Heysel Stadium disaster two days earlier.

Norwich would eventually get the chance to compete in the UEFA Cup in the 1993/94 season, having achieved their highest ever league finish by coming third in the inaugural Premier League the year previously.

It is there where the Canaries enjoyed perhaps their finest moment, as they stunned the footballing world by becoming the first British side in history to defeat German giants Bayern Munich at the Olympic Stadium.

Against all expectations, City raced into a 2-0 lead thanks to goals from Jeremy Goss and Mark Bowen, with the first strike in particular commonly viewed as the most iconic in the club’s history. 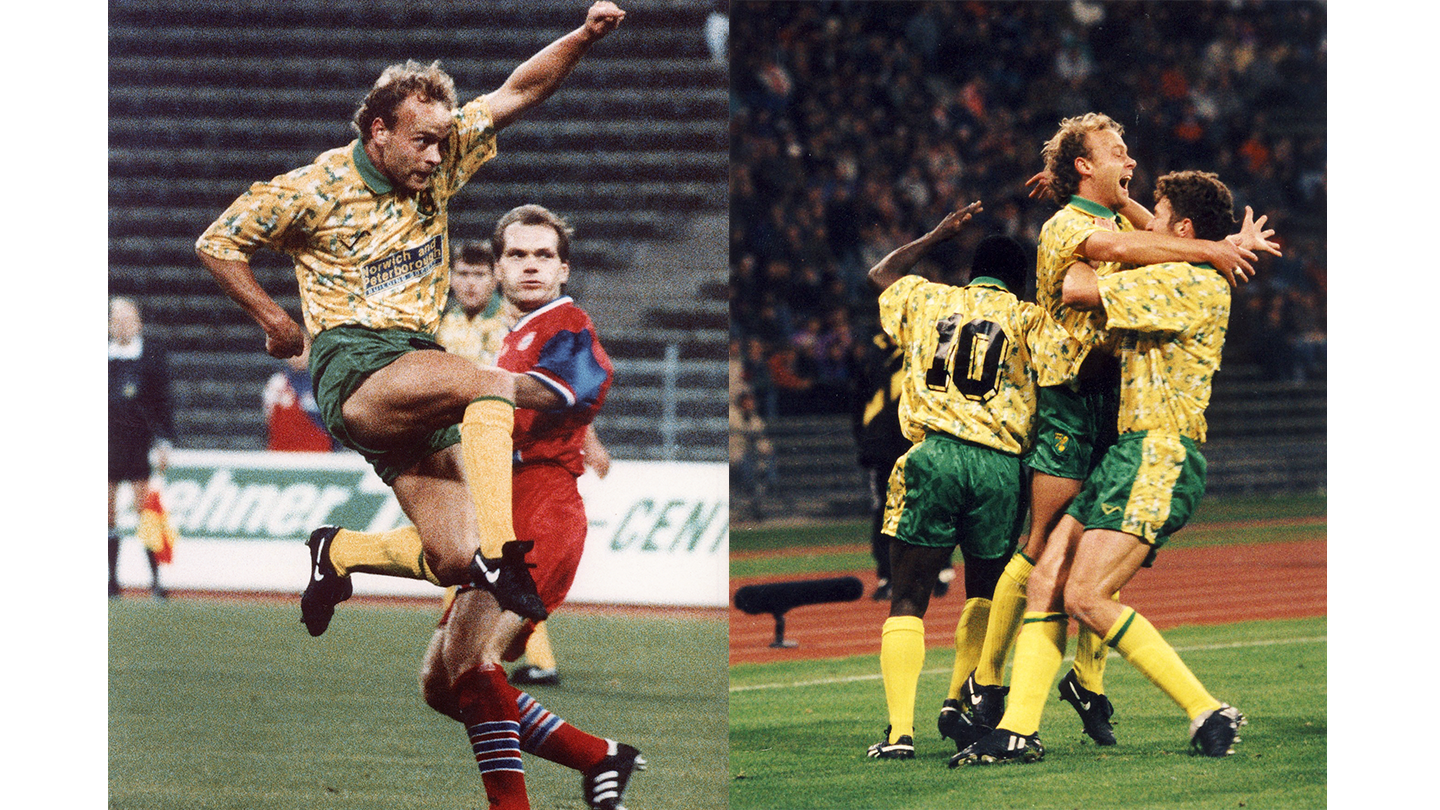 Despite City's success in Germany, many still expected Munich to progress at Carrow Road, particularly when the visiting side took the lead with just five minutes played.

However, Norwich held out, and a further strike from Goss early in the second half proved enough to take the Canaries through to the next round of the competition where they were narrowly beaten by eventual champions Inter Milan. The Canaries, and Goss especially, once again proved themselves on the big occasion at the end of that domestic season however as the midfielder struck the only goal of the game to seal a 1-0 win at Anfield on the last day of the standing Kop.

The Club was relegated at the end of the 1994/95 season, and were saved from the prospect of going out of business over the course of the following years by the support of Geoffrey Watling, Delia Smith and Michael Wynn-Jones. In 2002, City came close to returning to the Premier League, but eventually fell at the final hurdle as they were cruelly defeated on penalties in the Division One play-off final by Birmingham City.

Two years later, and Norwich avoided the lottery of the play-offs by racking up a total of 94 points to storm to the league title ahead of nearest challengers West Bromwich Albion.

The season also saw the end of an era as legendary striker Iwan Roberts left the club having scored 96 goals, including two in his final game against Crewe Alexandra as City celebrated their promotion.

Although their stay in the Premier League the following season was brief, the Canaries still managed to make their mark with some impressive results – none less so than a famous 2-0 victory over Manchester United at Carrow Road. A period of serious struggle followed for City as they dropped into the third tier in 2009 and faced the prospect of administration, ahead of newly-appointed chief executive David McNally helping to turn the footballing tide by hiring Paul Lambert as manager.

Under Lambert’s guidance the club enjoyed a complete turnaround in fortune as they secured back-to-back promotions from League One to the top flight, while also reaching a period of sustainability off the pitch by declaring themselves debt-free.

During the Scotsman’s second season in charge, Norwich produced the most emphatic East Anglian Derby double in their history as they thrashed Ipswich Town 4-1 at home before inflicting further misery on their neighbours in the form of a 5-1 mauling at Portman Road.

The first meeting with the Ipswich Town was notable for Grant Holt becoming the first City player to score a league hat-trick against Town, with his efforts duly rewarded by being named Norwich’s Player of the Year three times running from 2009 to 2011. 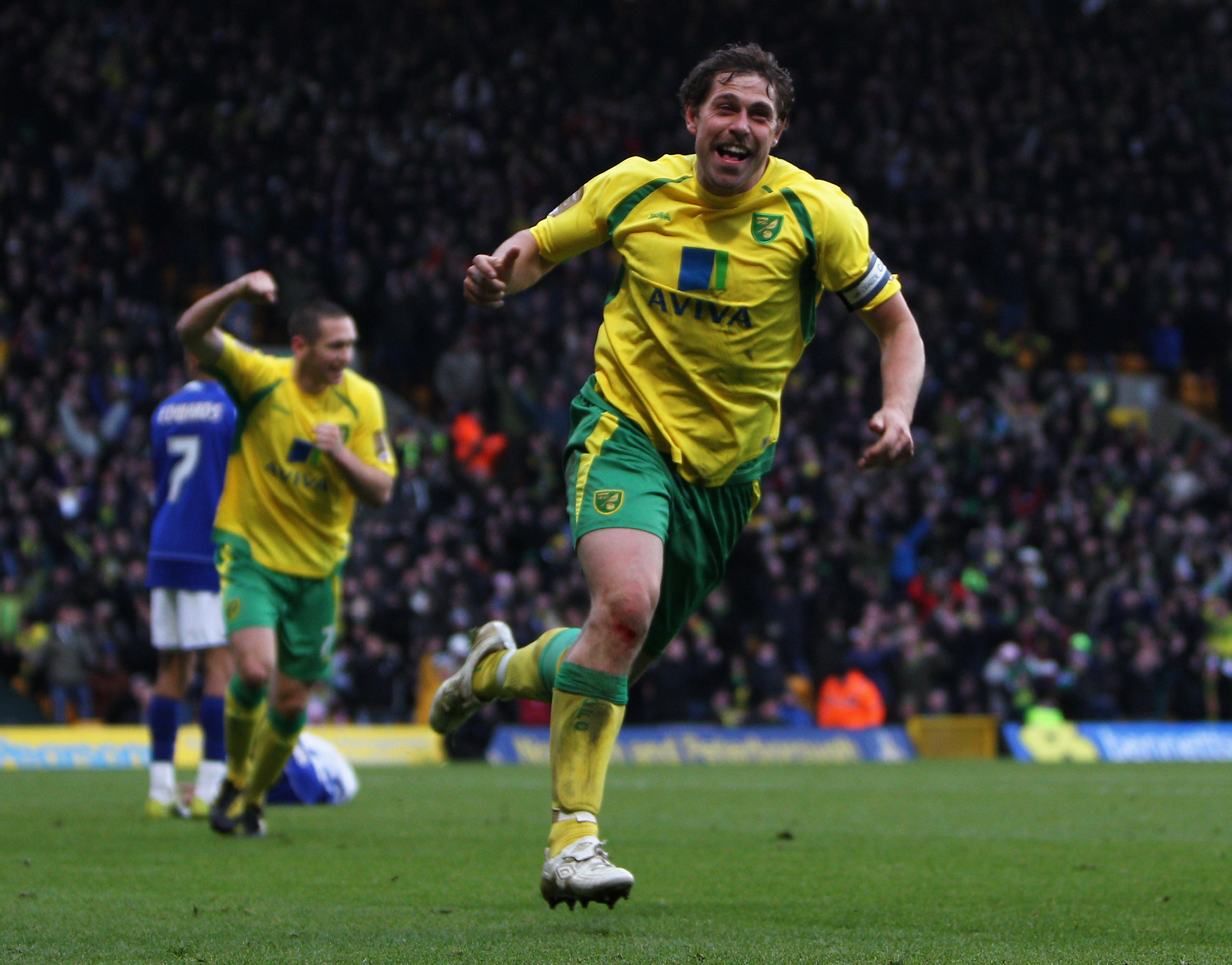 Following Lambert’s 2012 departure to Aston Villa, Chris Hughton was appointed, with the Canaries eventually relegated to the Sky Bet Championship at the end of the 2013/14 season some weeks after the former Newcastle manager had left the club.

Hughton was replaced by Neil Adams for the final five games of that campaign, with the former City winger taking up the position on a full-time basis in the summer of 2014 ahead of leaving the role the following January.

Alex Neil was appointed shortly after, following an impressive spell at Scottish side Hamilton Academical as the club prepared to mark 80 years at Carrow Road in 2015. Neil quickly made an impact and guided the Canaries to the top flight via Wembley, defeating Middlesbrough 2-0 in the final after beating local rivals Ipswich in the semi-final. 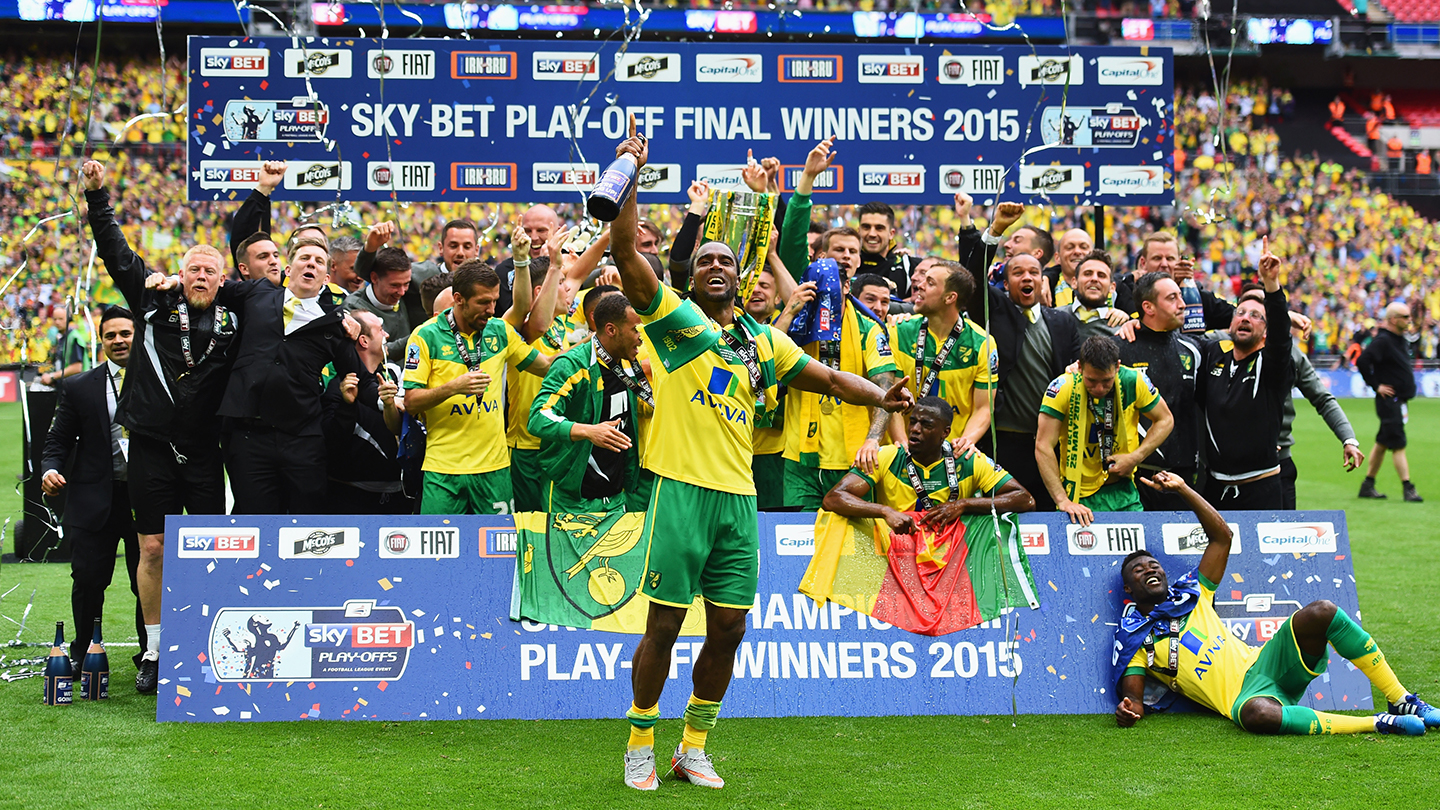 City's stint back in the Premier League lasted just one season, however, and after a frustrating Sky Bet Championship campaign in 2016/17, Neil left the club in March.

A new business and footballing structure was quickly implemented, with Stuart Webber joining as sporting director and first team coach Alan Irvine taking temporary charge for the final 10 games of the season, leading the team to eighth place in the table.

In the summer of 2017, Irvine left his post and was replaced by Daniel Farke, who joined from Borussia Dortmund II. Along with Webber, Farke began overhauling the playing squad as the club acclimatised to a second successive season back in the Championship and the team achieved a 14th place finish in his first season.

After further changes to the squad during 2018, including high-profile departures of Alex Pritchard, James Maddison and Josh Murphy, Farke and his newly-assembled squad set about recording an improved league finish.

At Christmas 2018, they were firmly in the promotion hunt and also managed to make it 10 years unbeaten in the East Anglian derby in January 2019 with a 3-0 victory over local rivals Ipswich Town. 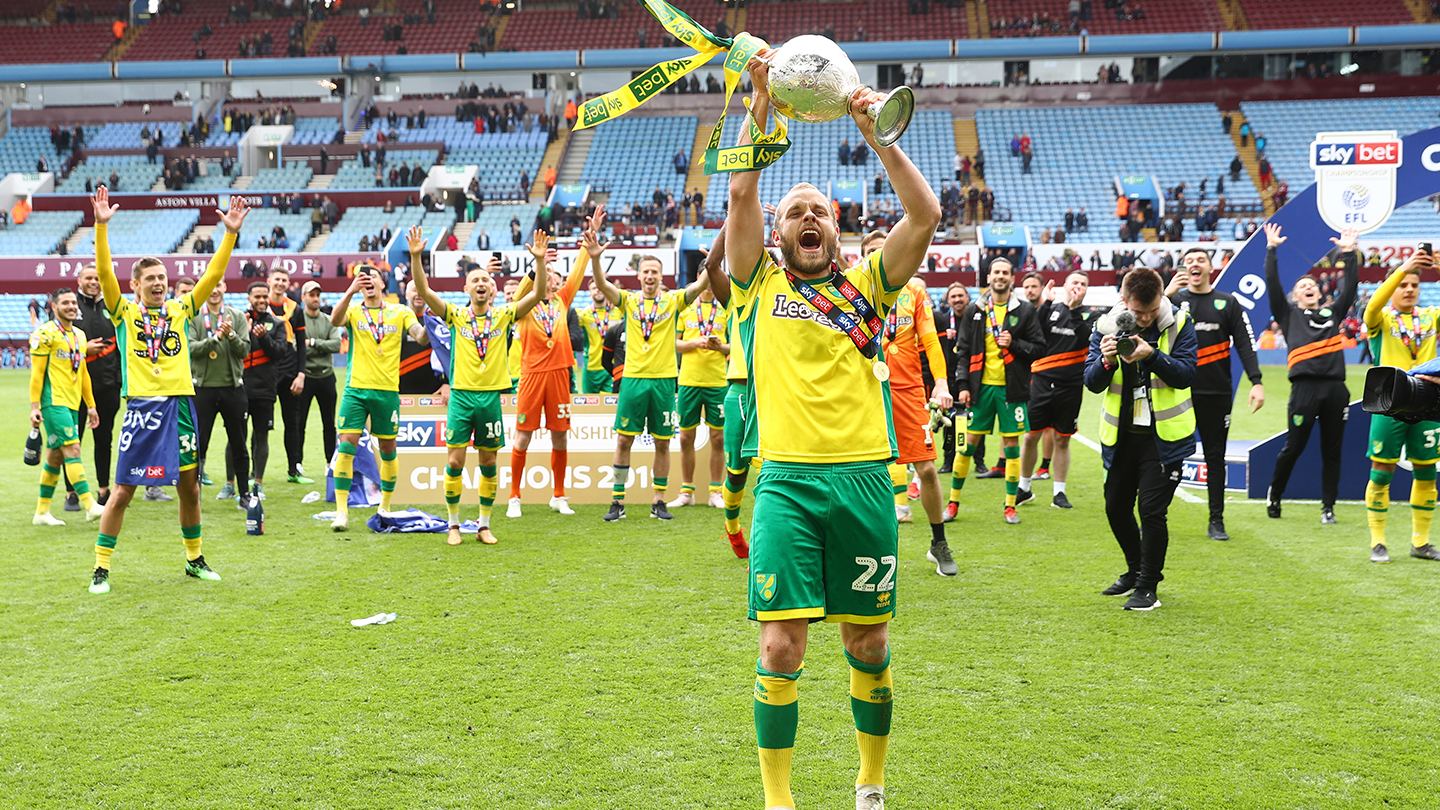 The 2018/19 season turned out to be a memorable one for the club as they won the Championship title with 94 points and sealed a return to the Premier League after just a three-year exile.

Promotion was sealed with a 2-1 win over Blackburn Rovers on April 27, 2018, with the league title confirmed following a victory of the same scoreline at Aston Villa a week later.

Teemu Pukki was the star of the show for City, winning the Championship Golden Boot with 29 goals and being named the division’s Player of the Season and winner of the Barry Butler Memorial Trophy.

Despite a promising start to the 2019.20 season, including an unforgettable 3-2 win at home to Manchester City, Norwich were relegated from the Premier League at the end of a campaign interrupted by the Covid-19 pandemic. However, the Canaries did reach the FA Cup quarter-finals thanks to a memorable penalty shootout victory over Tottenham Hotspur in the capital.

The stands remained empty for the majority of the 2020/21 season, but City put together a record-breaking season with 97 points in the Championship as fans watched on from home. Farke and his side returned to the Premier League at the first time of asking, with the likes of Teemu Pukki, Emi Buendía, Todd Cantwell, Max Aarons, Grant Hanley, Tim Krul, Kenny McLean and loanee Oliver Skipp all pivotal throughout the season.