Norwich City suffered a second consecutive Premier League defeat as they were beaten 2-0 by Crystal Palace on Saturday.

A three-minute spell of madness ultimately decided the game for City, as Ibrahim Amadou conceded a penalty, Luka Milivojevic scored, and Ralf Fahrmann got injured all within that timeframe.

Fahrmann, who was making his senior league debut for City, was replaced by Michael McGovern as the Canaries fought to find a way back at Selhurst Park.

It wasn't to be, as Roy Hodgson's side held firm and added another goal through Andros Townsend in stoppage time, before seeing out a 2-0 win and a precious three points.

Wilfried Zaha was presented with the game's first chance, winning the ball off Todd Cantwell and firing wide from a narrow angle before a minute had been played.

Fahrmann, making his senior league debut for City, was called into action on the 13th minute as Andre Ayew shot straight at him, having being played into a promising position by Zaha.

After weathering that early, mild spell of pressure from Palace, conceding the opening goal was an error of City's own making, during a three-minute period in which things quickly went downhill.

On the 20th minute, James McArthur received the ball in the penalty area from Zaha and was fouled clumsily by Amadou. The City defender failed to make any connection with the ball and complaints from the Canaries were kept to a minimum, before Milivojevic cooly dispatched from the spot, picking out the top right corner.

Fahrmann, who had guessed the right way but couldn't save the penalty, then had to make way for McGovern, who had picked up an injury.

Nevertheless, the longer Palace went without doubling their lead, the more Norwich grew into the game, enjoying a plethora of chances from the half-hour mark onwards.

Teemu Pukki saw an awkward volley tipped over the bar by Vicente Guaita, before Cantwell and Emiliano Buendia both had well-placed shots blocked and saved by Gary Cahill and Guaita respectively.

A clash of heads led to Ben Godfrey being bandaged up, and after that stoppage of play, City continued to put Palace on the back foot. Pukki saw a volley into the box parried across the line by Guiata, but Jonathan Moss and his VAR assistants agreed that the ball had gone out of play in the build-up.

The late flurry of first-half chances had the Palace faithful losing patience with their side at Selhurst Park as they struggled to clear the danger, but the momentum didn't amount to a tangible outcome for City, who went into the half-time break still 1-0 down. 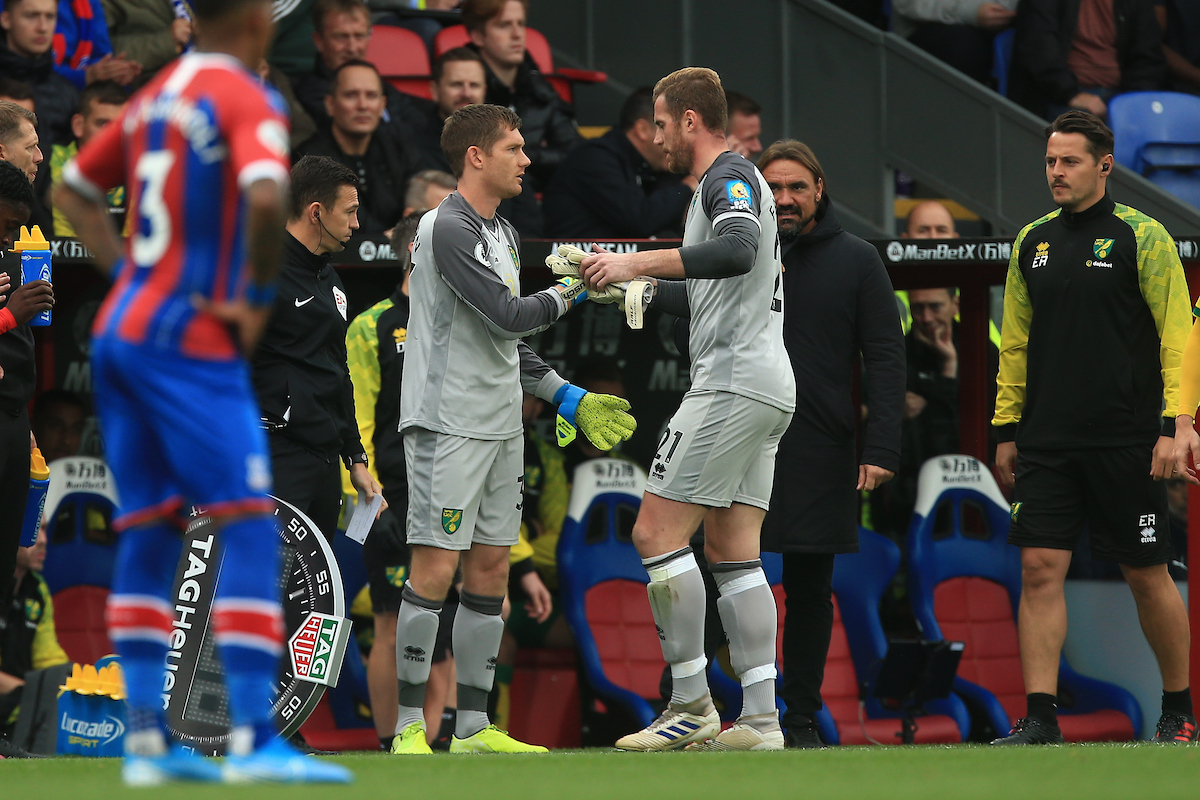 Palace came flying out the traps for the second half much as they had at 3pm, Zaha seeing a shot blocked by Lewis on 51 minutes.

McArthur fired a shot over the bar from distance, while Patrick Van Aanholt and Zaha had further chances without fidnding a breakthrough.

It was an end to end affair in the second half, with Cantwell shooting from distance on the 57 minute mark. His shot was too soft to trouble Guaita, and Norwich struggled to find a clear way through a resolute Palace defence.

Skipper Godfrey led the charge for another attack from the back, leading to Pukki laying in Marco Stiepermann who shot over the bar. The Finn unfortunately cut an isolated figure for much of the game with little support around him in the 18-yard box.

Zaha continued to pose a threat as he volleyed over from a Van Aanholt cross with 25 minutes to go and headed over from Townsend's delivery on the 83rd minute.

Five minutes of time were added on at the end of the 90, but in truth Norwich didn't look like finding that late equaliser, and so it proved. Zaha picked out Townsend in stoppage time, the latter finding the bottom corner for 2-0.