The Gabon striker tapped home from close range midway through the second half, but appeared to be standing in an offside position when he converted Nicolas Pépé's deflected shot home. However VAR, after reviewing the incident, allowed the goal to stand.

Head coach Daniel Farke made four changes to the side that lost to Leicester City two weeks ago, handing Premier League debuts to Christos Tzolis and Andrew Omobamidele as well as starts for Lukas Rupp and Kieran Dowell. They replaced Ben Gibson, Billy Gilmour, Milot Rashica and Todd Cantwell who all dropped to the bench.

Arsenal started the match looking to press high and put Norwich under pressure. However, the Canaries dealt with that well and created their first chance when Tzolis played a quick one-two with Kenny McLean before flashing a low ball across the six yard area that nobody was able to get on the end of.

The Gunners counter-attacked from that moment with Kieran Tierney finding Aubameyang but his early effort at goal was wide of Tim Krul’s post.

Around the quarter hour mark, Rupp did well to win the ball back off Bukayo Saka and set up Max Aarons with a crossing chance, but his ball into the area was headed just over by McLean.

Arsenal’s best first half chance arrived minutes later as Martin Ødegaard dinked a ball over the defence for Aubameyang to run on to but he was closed down well by Krul, who made a smart stop before Brandon Williams cleared the danger.

Teemu Pukki then did well to win a free kick off Ben White, to present Kieran Dowell with a sight of goal from 25 yards out. However, the Liverpudlian’s effort deflected off the top of the wall and behind for a corner.

There were a couple of more chances just before the break as Arsenal's new signing Takehiro Tomiyasu volleyed over the bar, under pressure from Tzolis, before the Greek striker found Pukki in the area and the Finn hit an effort towards goal that was well blocked by Brazilian defender Gabriel.

The second half began with Rupp sending an effort over Aaron Ramsdale's crossbar from distance.

However, Arsenal were quick to put the pressure back on the Canaries and when Ainsley Maitland-Niles slid a pass into Saka, Omobamidele made a superb block. Then moments later Williams did similar at the back post to deny a certain goal Pépé.

Arsenal then took the lead in controversial fashion after 65 minutes when substitute Tomas Partey found Saka who set up Pépé. His shot was superbly saved by Krul as he pushed the ball onto the inside post. However, the rebound fell to Pépé who after hitting another effort off the woodwork deflected the ball into the path Aubameyang who tapped home.

The Norwich City players protested that Aubameyang was offside but after consulting with VAR referee Michael Oliver allowed the goal to stand. 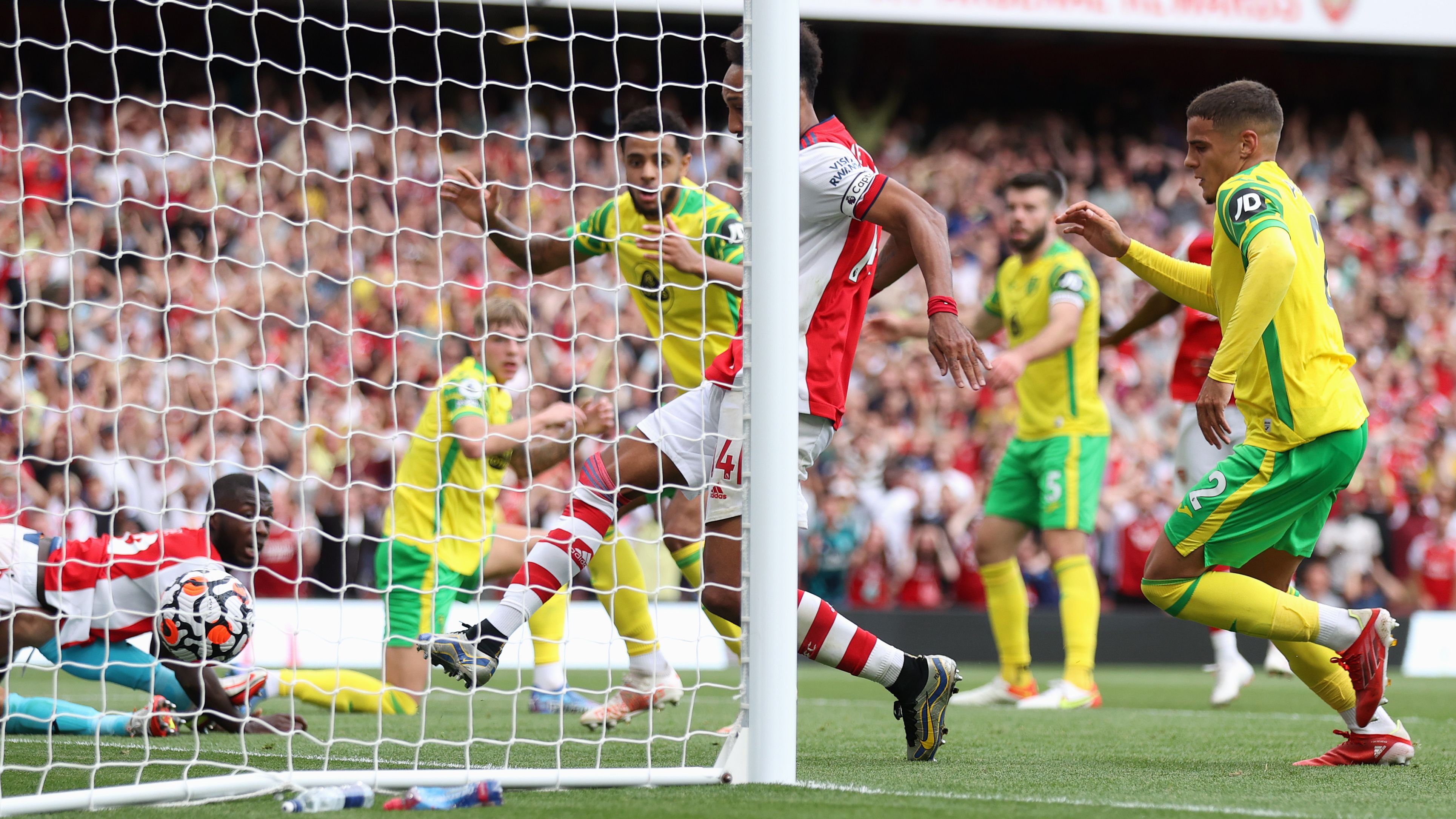 Farke responded by sending on Milot Rashica and Adam Idah for Tzolis and Rupp.

However, as Norwich pushed forward there were more chances for Arsenal on the counter and Krul had to save well with his feet to deny Aubameyang with seven minutes remaining. Krul was then in action again to stop an effort from Emile Smith-Rowe from inside the box.

Norwich kept pushing forward and when Idah found Pukki in the box he was denied by a superb block from Gabriel. However, the Canaries were not able to find an equaliser.