City succumb to defeat at Chelsea

Norwich City fell to a 7-0 defeat at the hands of European champions and Premier League leaders Chelsea on Saturday afternoon at Stamford Bridge.

The hosts raced into a three-goal advantage in the first-half, with Mason Mount, Callum Hudson-Odoi and Reece James scoring.

City struggled to handle the threat of Thomas Tuchel's men all afternoon and Ben Chilwell added a fourth early in the second-half, before a Max Aarons own goal made it five.

Ben Gibson was sent off for a second bookable offence on 65 minutes, compounding City's misery on a difficult afternoon in west London.

And a late Mount double, including one from the penalty spot, saw the final scoreline as 7-0.

There was just the one change on the bench with Jacob Sørensen replacing the ineligible Billy Gilmour.

Prior to kick-off, both sides joined in a minute’s applause for Matthew Harding, the former Chelsea owner who died 25 years ago.

Chelsea started the match on the front foot and after an early sight at goal from Antonio Rudiger, whose firm effort was well-saved by Tim Krul, they took the lead on eight minutes through Mount.

Hudson-Odoi’s cross into the penalty area was headed away by Gibson, but the ball was worked to Mount and he fizzed an unstoppable drive through Gibson’s legs and into the bottom corner.

Ten minutes later, Chelsea doubled their advantage when Hudson-Odoi span away from Ozan Kabak and latched onto a Mateo Kovacic through ball before slotting into the far corner. 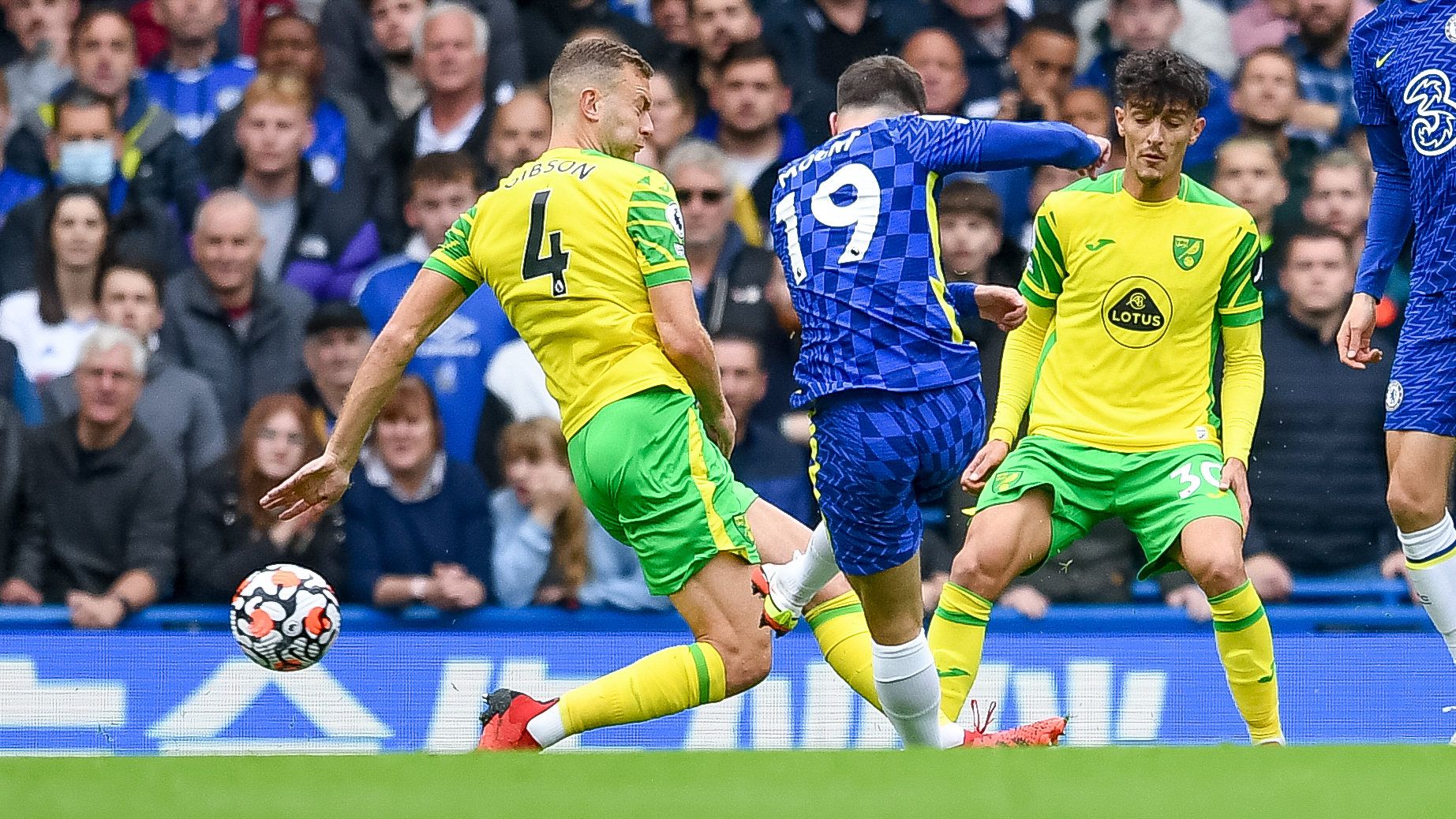 Dimitris Giannoulis was City’s main attacking outlet in the first-half as he managed to get in behind of James on occasions, however his handful of crosses were dealt with by Chelsea.

Instead, Chelsea looked the more threatening of the two sides and they added a third close to half-time when James found himself with space in the area and delicately lifted the ball over Krul and into the net.

Mount then had a sight at goal from distance after the ball was played back to him by James, but his ambitious, looping effort just missed the top corner.

Farke made a double change at half-time in a bid to change the fortunes for his team - Brandon Williams and Milot Rashica coming on for Giannoulis and Pierre Lees-Melou.

Rashica was straight into the thick of the action, following a poor backpass from Chilwell. The Kosovan wideman looked as if he had knocked the ball past Edouard Mendy in the Chelsea goal but Mendy recovered to block Rashica's attempt.

However, Chelsea's superiority continued and they made it four on 57 minutes when Kovacic moved the ball wide to Chilwell and he drilled a low strike in off the post. 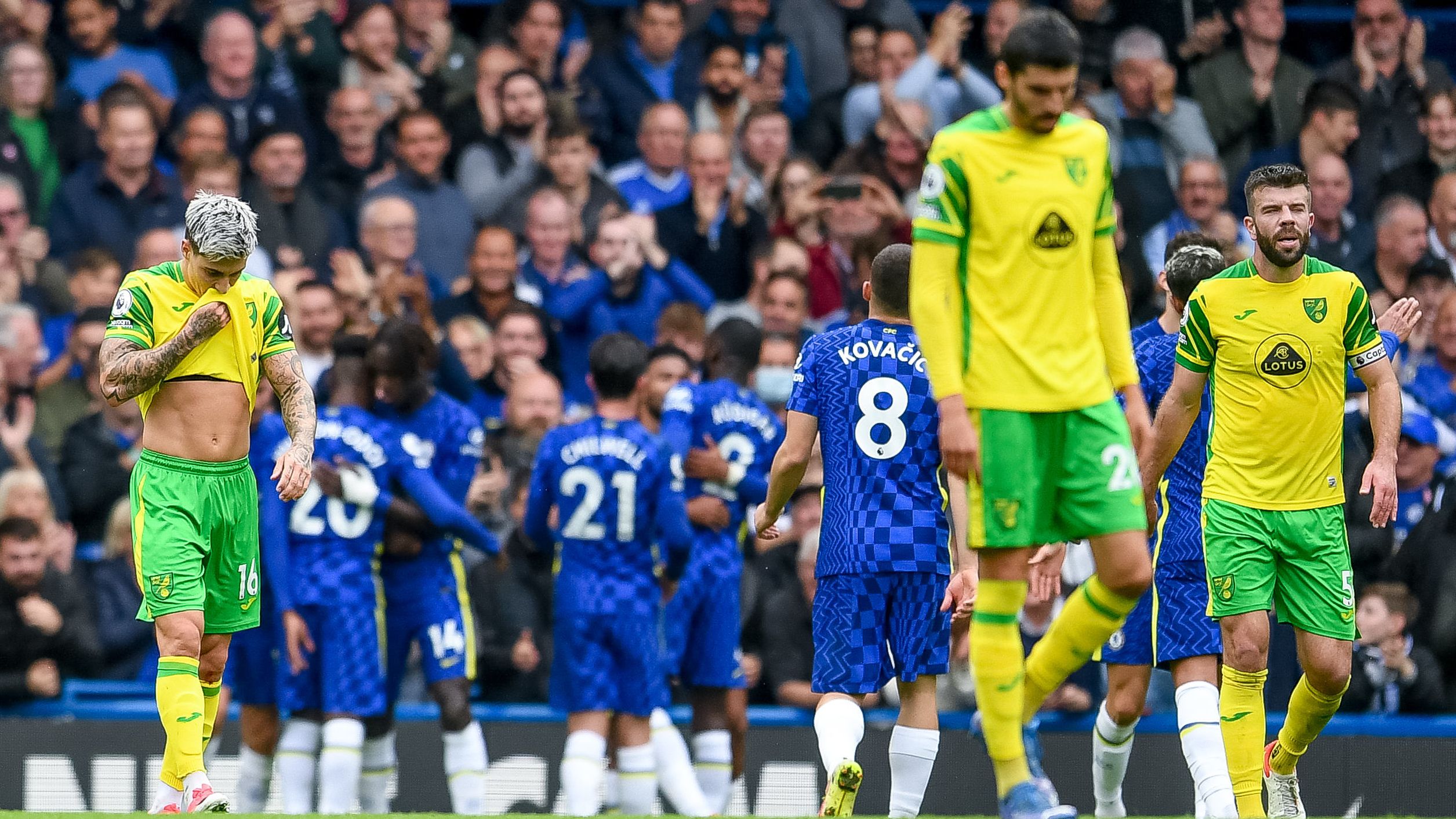 The misery continued for City as a Hudson-Odoi cross deflected off Aarons and past Krul for five on 62 minutes.

Moments later, Ben Gibson received his second booking in the space of ten minutes for a foul on Reece James as he was sent for an early bath.

On 69 minutes, Andrew Omobamidele came on for Josh Sargent.

Late on, Chelsea got their sixth of the match after Mathias Normann was adjudged to have handled the ball in the penalty area.

Mount's first penalty was saved by Krul, but referee Andy Madley ordered a retake after Krul had stepped off his life as Mount connected with the ball.

Mount made no mistake with his second spot kick, thumping the ball down the middle.

In stoppage time, substitute Ruben Loftus-Cheek squared for Mount to tap home for seven and his hat-trick.