A double from Takumi Minamino and a goal from Divock Origi saw Liverpool defeat Norwich City 3-0 defeat at Carrow Road in the Carabao Cup third round.

The Canaries conceded early on but had a good chance to draw level before the break when Dimitris Giannoulis was brought down in the box, but Christos Tzolis saw his penalty saved before Liverpool stretched their advantage in the second half.

Liverpool also made nine changes to the starting line-up from their last game and they came quickly out of the traps to take the lead in the fourth minute as a corner to the back post was headed down by Origi for Minamino to turn and shoot through the legs of Angus Gunn.

A sweeping counterattack 90 seconds later could have got Norwich back on level terms, but when Gilmour’s pass found Tzolis, the Greek international’s ball into the box was too far ahead of his striker partner Idah.

Ibrahima Konaté came close to making it 2-0 on 12 minutes as he headed over from a corner, before Gilmour replied with a free kick that he sent a couple of feet over the crossbar.

Norwich began to see more of the ball as the half went on, with Tzolis attempting to loop a header over Coaimhin Kelleher from a chipped ball into the box before Idah had a shot saved by the Irish keeper.

However, the best chance for Norwich to draw level came four minutes before the break as Gilmour found Tzolis whose shot was well saved by Kelleher, but as the ball bounced down for Giannoulis he was upended by a rash challenge from Liverpool's Conor Bradley and referee Darren England pointed to the spot.

Unfortunately for the home side though Tzolis stepped up and sent his penalty down the middle of the goal, allowing Keheller to block the effort with his legs and keep the visitors’ one goal lead intact. 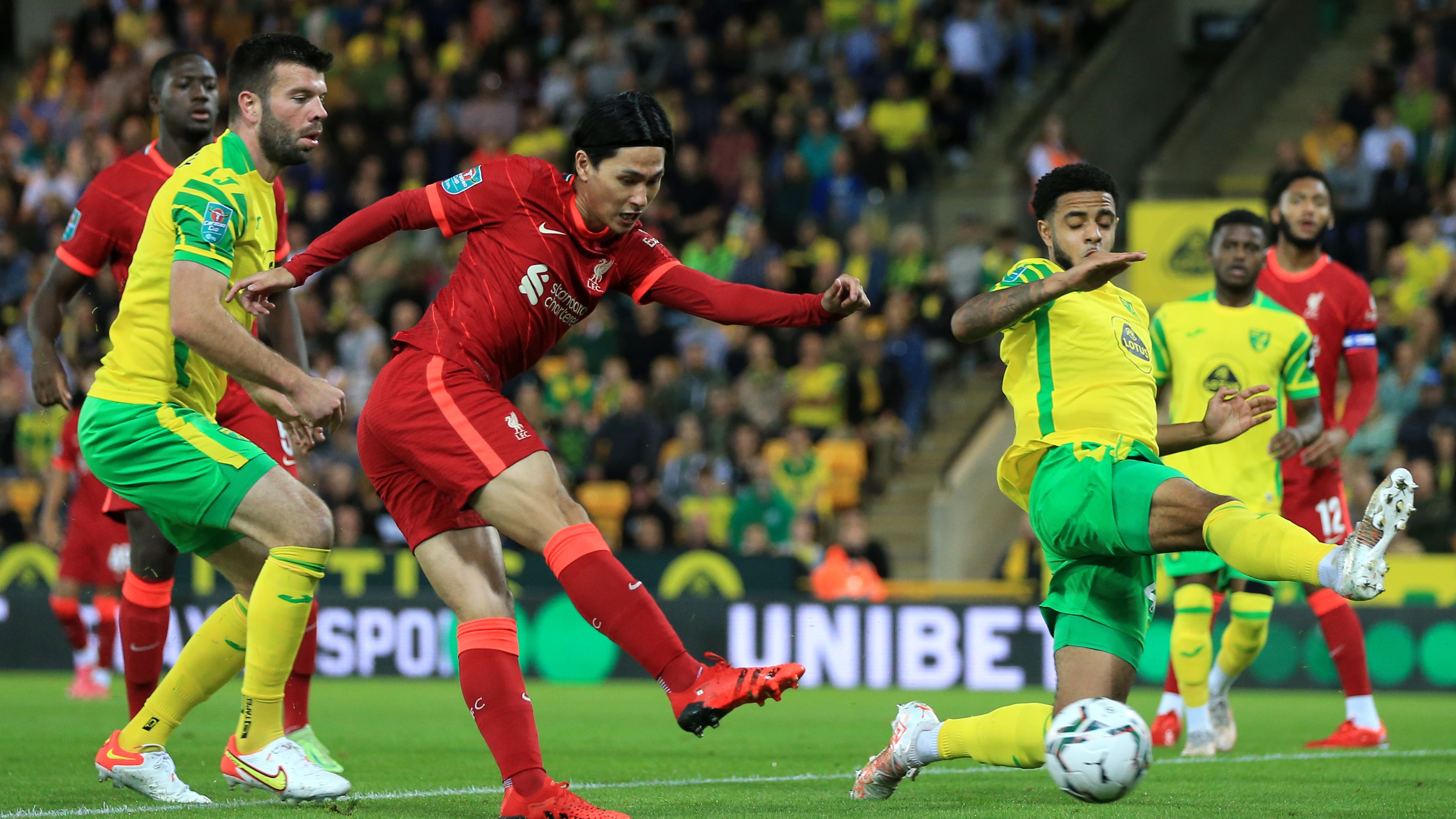 The Canaries had a great chance to equalise at the start of the second half as Giannoulis won the ball back on the left and played a low cross into the area for Lees-Melou to fire over from 10 yards out.

Liverpool then made it 2-0 on 50 minutes as Konstantinos Tsimikas, overlapping down the left, curled a cross to the edge of the six yard box for Divock Origi to flick a header into the bottom corner.

And the Belgian could have had a second on 53 minutes as he latched onto a pass from debutant Kaide Gordon but he sent a right foot shot just wide.

Farke then made a double change, with just over 20 minutes to go, as Teemu Pukki and Milot Rashica came on for Mumba and Tzolis.

With 16 minutes to go Andy Roberston gave away possession cheaply to Rupp but his effort was wide of the right hand post.

And then Minamino made sure of the victory with 10 minutes to go as Alex Oxlade-Chamberlain won the ball back high and feed the Japanese strike who fires under Gunn to make it 3-0.