Norwich City Women recorded their first win of the Women's National League South East Division One season with a 2-1 victory over Actonians.

The Canaries fell behind early on but battled back to lead at the break thanks to goals from captain Millie Daviss and Freya Symonds. Actonians controlled the second half but Norwich defended superbly to hang on to the points.

Norwich started the game strongly, but then the visitors capitalised on a momentarily sleepy City defence to take the lead after six minutes. Ellie Bishop initially did well to block a cross in from the right, but she was beaten on the second attempt and the Blues player was given too much space to fire home for the visitors.

Norwich didn’t let their heads drop though, keeping possession and making the visitors do a lot of chasing. Jodie Drake then broke forward and hit a shot just wide of the target.

At the 15-minute mark, City got the goal they had been pushing for, as Freya Symonds flicked a short ball to captain Millie Daviss in the box, who struck the ball in the top corner for her first of the season.

The tempo of the game continued to rise, as both sides were desperate to put themselves in front. Kate Parsons had the ball in the back of the net for City, after a scramble in the box, but the linesman had his flag up for offside.

City then made another attack as Megan Todd flew down the right wing, passing to Natasha Snelling who earnt City a corner, taken by Daviss. Symonds was able to get a touch on the ball in, setting up Parsons for a shot that was blocked well before Drake fired wide.

Bryony Williams was then forced to make a great save as City were still catching up from the goal kick and allowed the visitors to take a shot at goal from close-range.

City then found their second of the match, as the Blues were slow to react to a cross in from the wing and Symonds, as she collided with the Blues keeper and her defender, managed to poke the ball over the line.

Her celebration was cut short as she looked to have injured herself in the build-up to the goal and although she carried on for 10 more minutes she was eventually subbed off for Brooke Osborne. 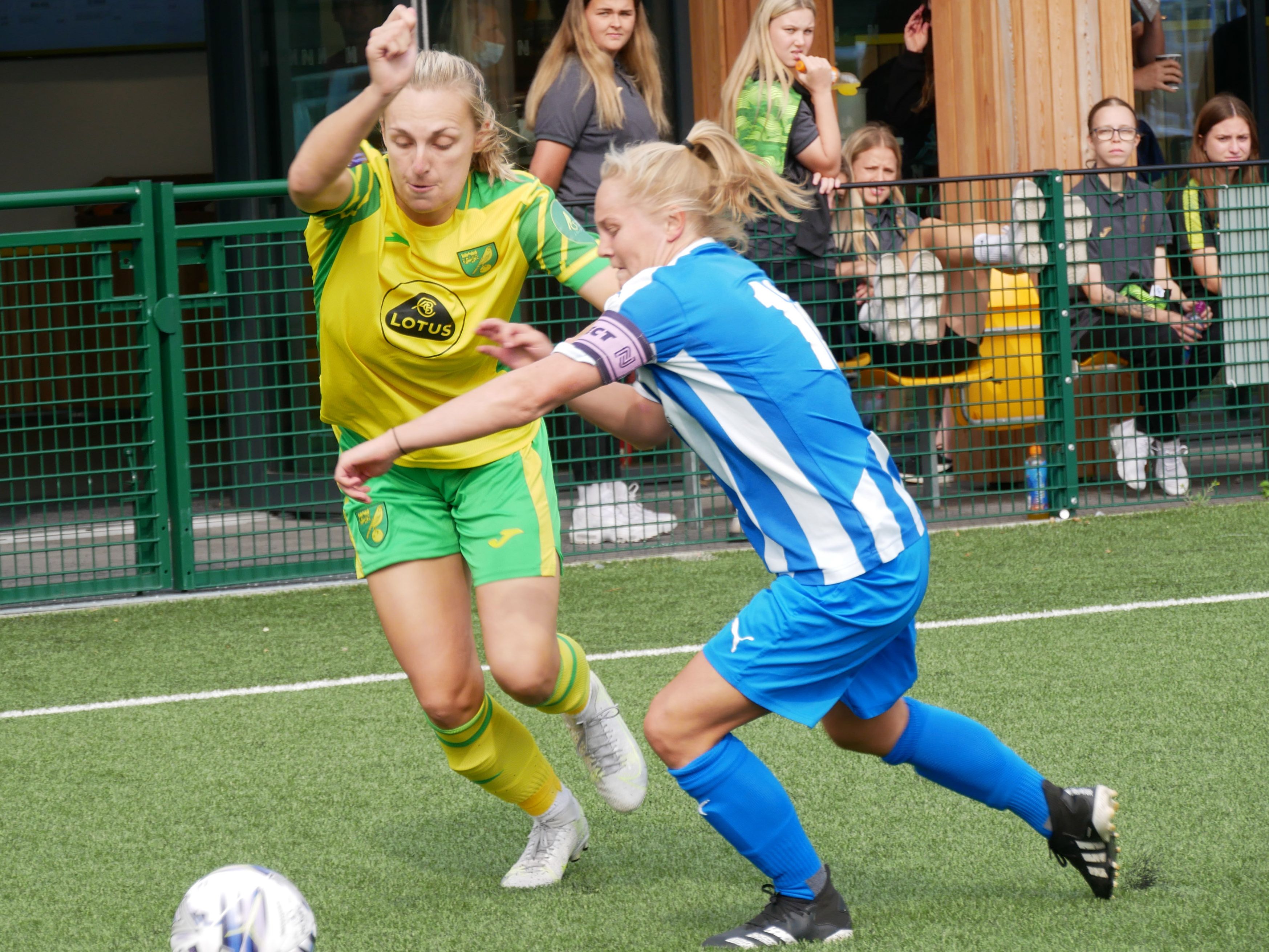 Actonians began to control the game in the second half, holding on to most of the possession.

Ellie Smith was key to both the City defence and attack at this point, as she continuously got stuck into every tackle and pushed City out of danger to make some important attacks.

Natasha Snelling had the chance to make it three for City just before the 60-minute mark as she was set up for a one on one with the keeper but was denied as the Blues keeper stood strong and blocked her shot.

Actonians continued their attacks and put Williams under pressure as she had to make two consecutive saves in the six-yard box.

City began to look tired, and the defence were being put to the test as Actonians were searching for the equaliser, but they just couldn’t finish the job in the box.

Norwich had one final press with Todd racing down the left wing and getting a powerful shot on target, but Actonians’ keeper collected without a struggle.

The final few minutes were nervous for the home side, but there was a relief when final whistle blew as City collected their first three points of the season.