Today marks the 116th anniversary of the formation of Norwich City Football Club. To celebrate, we take a look at 11 significant moments in the Club’s history.

1902: The Club is formed
On June 14, 1902, the Eastern Daily Press carried a notice heralding what would be the birth of the Club: it announced that a meeting on June 17 at the Criterion Café on White Lion Street had been called by schoolmasters Robert Webster and Joseph Cowper Nutchey. The intention was to form a city football club and, that evening 116 years ago, papers were signed. Norwich City Football Club was born.

1920: City enter the Football League
Norwich spent the first three years of their existence in the Norfolk & Suffolk League, before turning professional in 1905 and entering the Southern League alongside familiar names such as Southampton, Tottenham and West Ham, and less familiar names like New Brompton. Ahead of the 1920-21 season the Football League created the Third Division, split into South and North sections. The Canaries – as the Club was now affectionately termed – would finally have the chance to rise through the league pyramid. City’s first Football League match was a 1-1 draw away at Plymouth Argyle, while their first home game – also against Plymouth – was a 0-0 draw in front of 12,000 fans at The Nest.

1934: Promotion to the second tier
Tragedy struck in 1933 when manager James Kerr died of pneumonia with Norwich riding high in Division Three South. His replacement Tom Parker inherited a strong side, and the following season he led City to the title. Two of Parker’s signings, Jack Vinall and Billy Warnes, both scored 21 goals as the Canaries finished seven points ahead of second-placed Coventry. For the very first time Norwich City would be playing in Division Two of the Football League.

1935: Moving home
After 27 years at The Nest – a venue that was always an idiosyncratic choice to host football due to its sloping pitch – Norwich started looking for a new home as they began to adapt to life in the second tier. Sites at Boundary Park and Barrack Street were considered, but the Club settled on a site by the Wensum. Work began on the new location on June 11. Famously, it took just 82 days for the ground to be built, a feat that was referred to as “the eighth wonder of the world”. Carrow Road was open for business. West Ham were the visitors for the first match of the 1935-36 season, and the 29,779 crowd was treated to a stonking 4-3 win. City’s Doug Lochhead scored the very first goal at the ground to put Norwich 1-0 up. 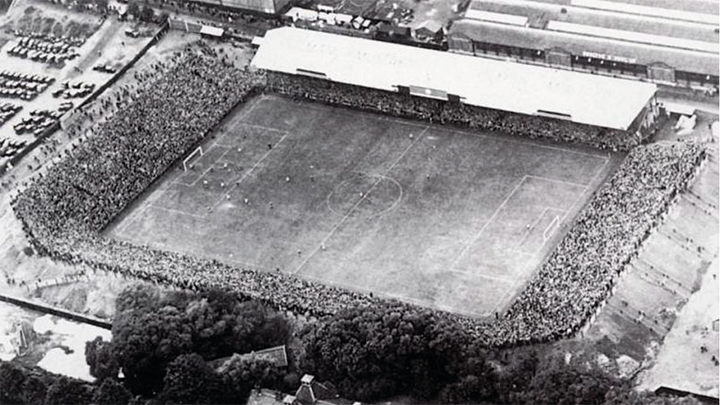 1958: FA Cup heroes
In November 1958, local lad Terry Bly made his debut for City in the first round of the FA Cup, as Norwich struggled to a 3-1 win over amateur side Ilford after being 1-0 down at half-time. It was an inauspicious start to one of the great cup runs. A 1-0 win in a replay over Swindon Town in the next round set up a meeting with Manchester United. 38,000 flocked to Carrow Road on an ice-cold day to catch a glimpse of the famous Busby Babes, and left having watched a miracle. United, who had won Division One in both ’55-56 and ’56-57, were overwhelming favourites against a side two divisions below them. But they were stunned in the 31st minute when Bly hammered in a Bobby Brennan pull-back. Norwich fans really started to believe when Errol Crossan nodded in a second, and the best was saved until last, with Bly cutting in from the left and driving in the third in the 88th minute (illustrated below by Matthew Craven). City registered wins against Cardiff, Spurs and Sheffield United but agonisingly went down 1-0 in a semi-final replay to Luton Town. 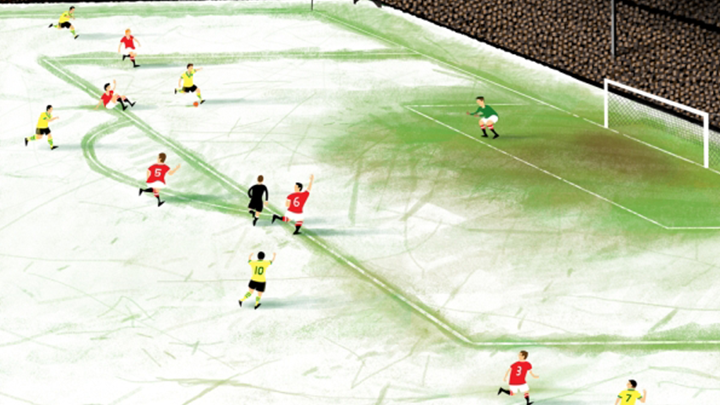 1962: First major trophy
In the League Cup’s second season, Norwich beat Chesterfield, Lincoln City, Middlesbrough, Sunderland and Blackpool on their way to a shock appearance in the final. More remarkably, they would face Division Four side Rochdale in the two-legged final. A brace from Derrick Lythgoe and a goal from Bill Punton gave City a 3-1 win in the first leg away from home, and 19,800 tuned up to Carrow Road to see Jimmy Hill score the only goal of the second leg to seal a first major trophy for Norwich City.

1972: Reaching the promised land
After six seasons of finishing around mid-table in Division Two, little was expected of Norwich heading into the 1971-72 season. However, under manager Ron Saunders, the Canaries started strongly; so strongly, in fact, that they went 13 matches unbeaten. The good start captured the imagination of the city, with crowds regularly in excess of 25,000 following years of smaller turn-outs at Carrow Road. A 2-1 win at Leyton Orient in the penultimate match, with goals from Ken Foggo and Trevor Howard, clinched promotion. A goal from Dave Stinger on the final day helped Norwich draw 1-1 at Watford, and the point was enough to earn City the Division Two title. Next season they would be playing in the top tier for the very first time.

1985: Milk Cup triumph
On one of the great Carrow Road nights, Steve Bruce scored a last-gasp winner in the second leg of the League Cup semi-final against Ipswich. That set up a meeting with Sunderland in the final. Just after half-time, Asa Hartford’s shot was deflected in to give Norwich a 1-0 lead. Clive Walker missed a penalty for Sunderland and City held on to lift the trophy, with over 20,000 fans lining the streets of Norwich for an open-topped bus parade a day later.

1993: European nights
After finishing 5th and 4th in Division One in the 1980s, two successive seasons of struggling towards the bottom of the table suggested City’s outstanding era was petering out. But a 4-2 win away at Arsenal on the first day of the very first Premier League season set in motion a remarkable campaign that saw Norwich leading the table at Christmas. Alex Ferguson’s Manchester United eventually won the title, with City’s third-place finish the best in the Club's history. But the highs of 1993 didn’t end there, with perhaps Norwich’s most famous achievement still to come: Mark Bowen’s header and Jeremy Goss’s spectacular volley helping the Canaries to a remarkable 2-1 win against Bayern Munich at the Olympic Stadium. A 1-1 draw in the second leg at Carrow Road ensured City knocked out the European giants. 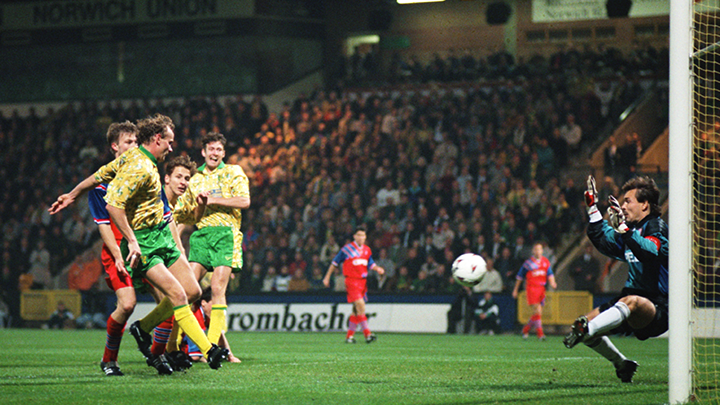 2011: Back-to-back promotions
Just two seasons following Norwich’s relegation to the third tier for the first time in 49 years, the Club were back in the Premier League. After Paul Lambert’s men had swept to the League One title, they carried the momentum into the following season. On the back of Grant Holt’s and Simeon Jackson’s goals – many of them memorable late winners – the Canaries made it back-to-back promotions with a 1-0 win at Portsmouth.

2015: Wembley winners
“It’s two! It’s a blistering start from Norwich City!” Nathan Redmond’s 15th-minute strike to put Alex Neil’s men 2-0 up in the Championship play-off final against Middlesbrough at Wembley is already firmly established in Canary folklore. When Neil took over Norwich were 7th in the table, but he engineered 17 wins in 25 matches to take City into the play-offs. A semi-final triumph over Ipswich Town took them to Wembley on a high, where Redmond’s and Cameron Jerome’s goals sent 40,000 green-and-yellow fans inside the stadium wild.