With excitement building in the week leading up to our first competitive game of the season, we’ve been producing various previews of Saturday’s game on canaries.co.uk.

Our Match Pack - new for the 2020-21 season - is the one stop shop for all of the need to know content ahead of the weekend!

“Just six weeks on from the end of the 2019-20 season, Norwich City kick off their 2020-21 campaign with a Carabao Cup first round tie at Luton Town on Saturday (3pm KO).

Providing details on Luton Town, our head-to-head record with the Hatters, the referees in charge of the game and how fans can follow from home, our Match Preview is essential pre-match reading material.

Bali Mumba: Saturday is a big opportunity for the new faces

“I played them when I was at Sunderland once, so I know a little bit about them. They’re coming into the game eager to beat us, prove a point and show that they can beat us, but we just have to go into the game with the mentality that if we work harder than them then there’s no doubt we can get the win.”

We caught up with summer signing Bali Mumba at Lotus Training Centre this week to preview Luton, find out how he’s settling into life in Norwich, and see how he got on in the pre-season go-karting race!

With 15 away on international duty, the Norwich City players who have remained at Lotus Training Centre have been hard at work training together to get ready for Saturday’s game.

Use the link above to scroll through the best of our photographer’s snaps!

“They would take a lower mid-table season as a success this term and then keep trying to build as a club really.

“I think he’ll be playing a strong side and looking to get through this first round.”

Having not played Luton since 2013, there’s much to catch up on! Mike Simmonds is a journalist who covers the club’s fortunes for Luton Today, so we gave him a call to find out more about the Hatters.

For this week’s Memorable Match, we’ve re-wound the clock 13 years to a time when both Luton and Norwich were fighting at the wrong end of the Championship.

With three points vital to both side’s quest to avoid relegation, City’s Simon Lappin found the perfect time to score his first goal for the club with a stoppage-time free-kick in a 3-2 win at Kenilworth Road.

Let’s hope this weekend’s game is just as entertaining!


Norwich City can confirm the details of their first-round fixture against Luton Town in the Carabao Cup have been set.

Norwich City fell to defeat in the first round of the Carabao Cup as a hat-trick from James Collins in the final 15 minutes of the game gave Luton Town a 3-1 victory at Kenilworth Road.

The Canaries had looked the more likely team to break the deadlock as the game approached the final stages, but a clumsy challenge gave the hosts the chance to open the scoring from the penalty spot. Kieran Dowell restored some hope moments later as hit home a first-time shot on his debut to level the scores, but Collins netted again in the 82nd minute and then fifth minute of stoppage time to see his side safely through to Sunday’s second round draw.

With 15 players away on international duty, and Sam Byram and Grant Hanley injured, head coach Daniel Farke handed out five debuts in his starting XI.

He was joined by his academy teammates Jon McCracken, Reece McAlear, Andrew Omobamiedele and William Hondemarck in the match day squad as they took their places on the substitutes’ bench.

Norwich had the better of the territory and possession in the open exchanges but, on the counter-attack, it was Luton who created the early chances.

First Elliott Lee shot over after Sonny Bradley had nodded a corner into his path and then Christoph Zimmermann had to be alert, to put in an excellent block as Collins looked to turn home a low cross from Harry Cornick, with 15 minutes played.

City replied as McCallum’s volley, from a half-cleared corner, was blocked in the area and then Lukas Rupp rippled the side netting with a drive from 25 yards out.

Debutant Mumba then got the game’s first effort on target, after 26 minutes, as Josh Martin’s deflected shot found him on the right side of the area. However, his effort, which arrowed towards the top corner was expertly turned over his crossbar by Luton Town shot stopper James Shea.

Five minutes later and the hosts had their best chance of the first half as a corner was played towards the back post where Martin Cranie sent a header just wide.

Dowell almost created an opening with a good slaloming run through the home defence before Rupp warmed the gloves of Shea once more with another effort from the outside of the box, which the keeper had to gather at the second attempt.

As the sides went into the break though it was Collins who sent in another warning shot as he got on the end of a Cornick pass in the area and sliced an effort wide.

The second half began with Marco Stiepermann firing a shot towards goal, that Matt Pearson bravely blocked with his midriff.

Norwich then upped the pressure on 55 minutes as Alex Tettey hit a right foot shot from distance that forced a good save from Shea and from the resulting corner Stiepermann tested the keeper once more with a good shot.

Timm Klose was forced off injured just before the hour mark, being replaced by Mario Vranic in a move that saw Tettey drop into the centre of defence.

Mumba, impressing on his debut, then almost created the first goal as he drove forward into the box before delivering a low cross that Hugill was inches away from connecting with at the back post.

Then on 65 minutes, City managed to hit Luton on the counter for the first time as the hosts brought everyone forward for a corner only for Hugill to win the ball on the edge of his own area and play in Josh Martin who worked a yard of space before firing a low shot that Shea saved.

However, that was the last action of note for Martin as Farke sent on Onel Hernandez for him to try and find a winner. It was the hosts who were to get the breakthrough though, with 13 minutes to play.

The goal came from a cross from the right that wasn’t cleared by Vrancic at the back post. That forced the midfielder into a rash challenge on Pelly Ruddock-Mpanzu to give away a penalty that Collins converted.

Dowell offered some brief hope for Norwich as he latched onto a loose ball 20 yards out and fired a first-time effort into the bottom corner but City were not level for long.

A couple of minutes later, Luke Berry sent in a cross from the right that Ruddock-Mpanzu cushioned into the path of Collins for him to hit a half-volley past Barden.

Five minutes of injury-time gave Norwich some extra time for a second equaliser but as they pushed forward the Canaries were caught on the counter as substitute Jordan Clark raced down the right before squaring the ball to Collins who found the bottom corner to complete his hat-trick.


Norwich City can confirm the details of their first-round fixture against Luton Town in the Carabao Cup have been set. 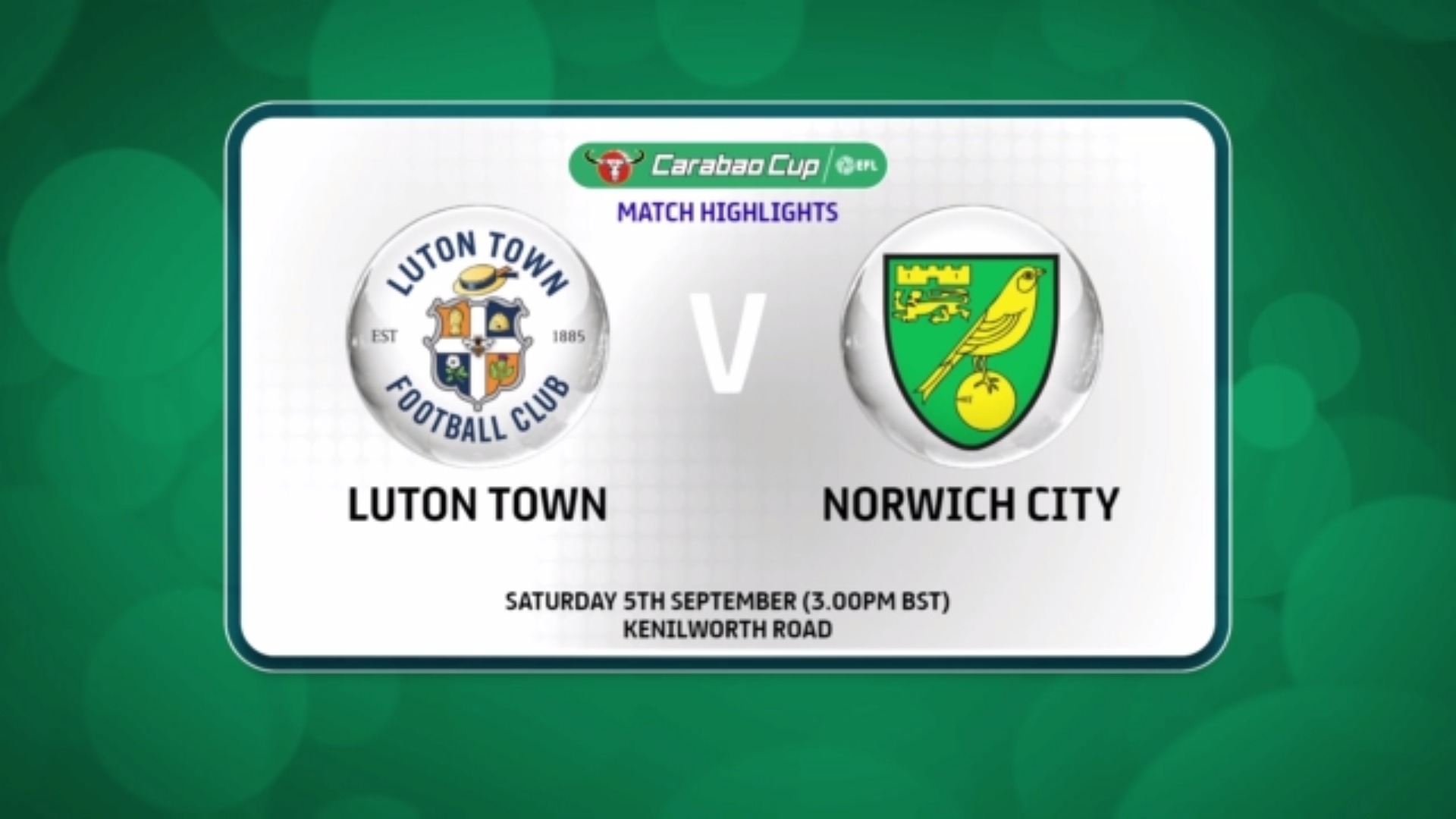 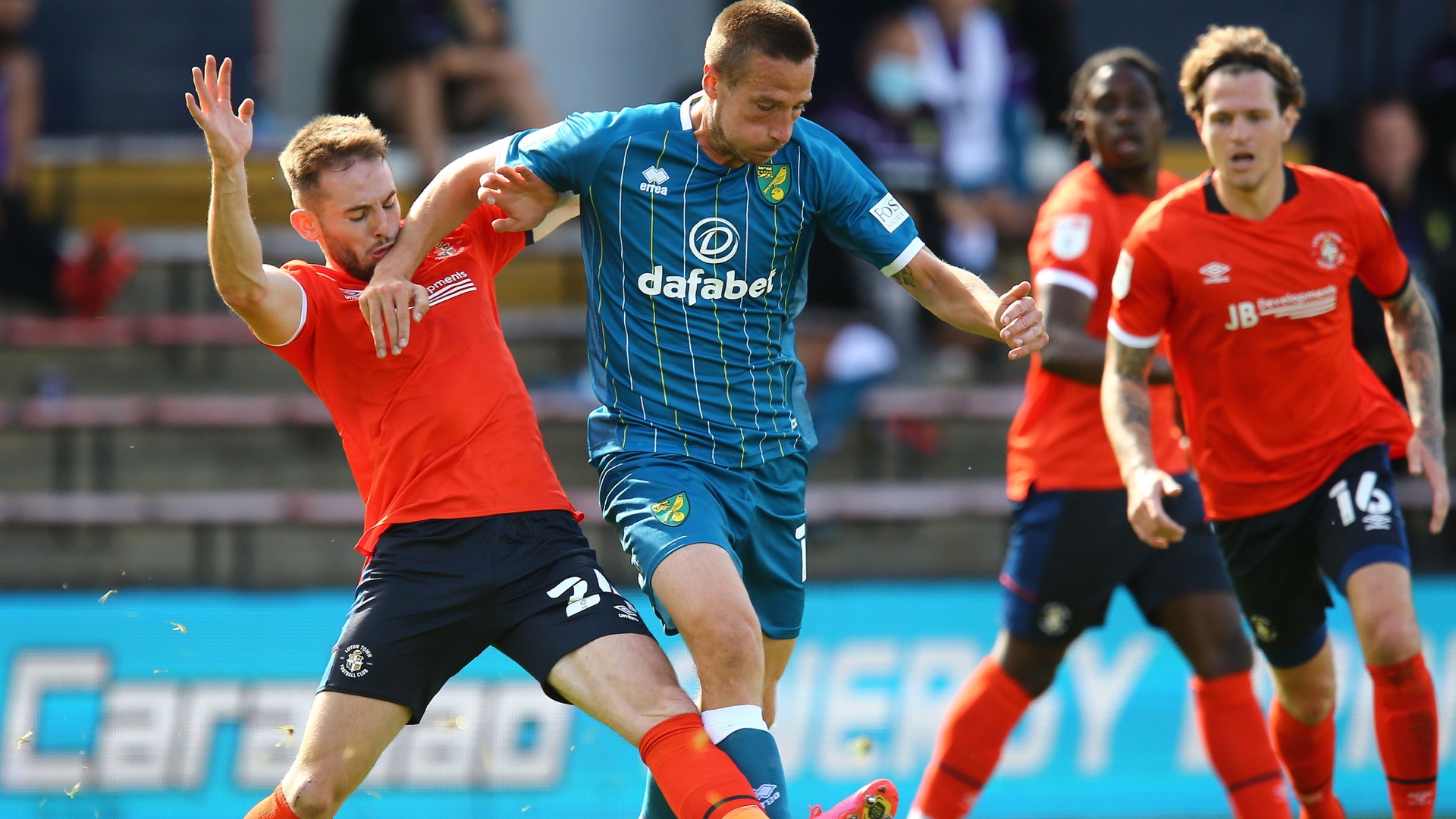 It’s a big game today and you’d probably like to be standing in the stands right now waiting for the teams to arrive. We’ve got the next best thing. You can watch all the live action from Norwich City v Coventry City with one of our Match Passes. They only cost ##MP_PRICE## for the best view in the stadium.