Ahead of the match, which will decide who tops the group, canaries.co.uk spoke to Jon Palmer, who covers Cheltenham for Gloucestershire Live.

canaries.co.uk: Both teams have qualified for the knockout stages of the Papa John’s Trophy, having both been knocked out in the group stages last season. Is that satisfying progress for Cheltenham, to be beating the other league sides?

JP: Yeah, I think the competition might have taken on a bit more importance for Cheltenham this season because of the prize money. You get £8,000 for a group stage win, which might not sound like much but obviously Cheltenham, like every other club, have got no money coming in at the moment in terms of fans, so they really targeted qualification from the group.

I think it’s pleasing that they’ve gone through, because that’s valuable income for a club like Cheltenham. For getting through the FA Cup first round on Saturday, I think they got £16,900, and all these little bits of income will help to ease the trouble of no gate receipts coming in.

The furthest Cheltenham have been in this competition is the area semi-finals, and when you get to that stage, you start getting a bit more excited because Wembley is on the horizon and the final would have been a packed Wembley.

Some really big clubs have got there and your eyes start to light up, but the earlier rounds have sometimes been a bit of a damp squib when teams have made changes and had to make long trips.

One season, Cheltenham had to play Blackpool away in the group stage, which seemed a bit of a trek, a bit like Norwich having to come to Cheltenham - it’s a long old trip - but I think the fact they’ve put that prize money in has given that bit extra incentive and it’s definitely not something Cheltenham will be taking lightly this season with the current situation.

canaries.co.uk: How did the previous group games go against Plymouth and Newport? Were there positive performances in the team to take into League Two?

JP: The main positive has been Reuben Reid’s goals. He’s scored all three goals so far. It was a bit of a strange one with the first group game taking place before the first league game; I can’t remember that ever happening before.

Going to Newport and getting a 1-0 win - Reuben Reid with a good header 20 minutes from the end - was a high point and a few young lads came in and did well. A couple of first year pros like Grant Horton and Tom Chamberlain both started the game and gave a good account of themselves.

In the Plymouth game, Plymouth are in the league above and put out some strong players but Reid, who was up against his former club, was definitely keen to impress and he scored two really well taken goals to win it 2-0.

The main positives are Reid’s goals, the young lads given a chance and doing well, and obviously the prize money from those two games combined getting a valuable £16,000 in the bank.

canaries.co.uk: Is it viewed as a distraction from competing in League Two, or more an opportunity for silverware?

JP: This competition has been vital. Two seasons ago, Michael Duff took over in September and he had a bit of a struggle for his first nine or ten games and couldn’t get a win. They then had a trophy game against Arsenal Under-21s and he experimented with a different formation, moving a couple of players around, and Cheltenham beat Arsenal 6-2 and he’s basically stuck to that formation ever since.

It was a chance for him to experiment and that was when they first started playing 3-5-2. Ben Tozer, who had been playing in midfield, moved to the middle of a back three, and he’s now become one of Cheltenham’s main players and is the club captain, but before that game he was struggling to get in the team and wasn’t in great form.

Michael Duff will always see it as a useful competition, not only for that, but also because there are a couple of players in need of game time who are coming back from injuries, so George Lloyd, who was in the team week in, week out, will be given some minutes.

Scott Flinders, the goalkeeper, is first choice and an experienced pro, but has been out since last January with a broken leg, so he’s likely to get some more minutes.

canaries.co.uk: You’ve touched on it there, but what style of play do you expect Cheltenham to go with?

JP: They’ll be up for it, because if you win the group then you’re guaranteed a home tie against a group runner-up in the next round.

For the lads who come in, they’ll be desperate to impress to get themselves in Michael’s thoughts for the next league game which is Carlisle away, so I don’t think Cheltenham will relaxy because they’re already through.

They’ll want to win the group, get the money, and some lads will really want to press their claims for a return to the starting 11 for the next league game.

It’s quite useful to have this game. There have been a lot of Tuesday night league games recently, so Michael knows Cheltenham haven’t got a game next week, meaning he can give the lads that need minutes the time to top up their match fitness in this one.

This game has come at a good time for some of the lads who didn’t start the FA Cup game against South Shields.

He’s probably got over 20 players who are pressing for first-teams starts in the league, so you can’t keep them all happy.

Reuben Reid’s goals in the trophy have helped him get in the team for the league games, so they’ll know that if they perform well against Norwich, they can get into the team.

Even though it’s been a hectic fixture schedule recently, with there being no FA Cup replays, this is the last group game and a 6pm KO, it’s sensible and fans can watch the game online.

canaries.co.uk: As for Norwich, have you been surprised by the results the U21s have achieved in this tournament, beating Newport 5-0 and Plymouth 3-2?

JP: It’s been really interesting seeing the different U21s team Cheltenham have come up against in this competition since that regime was introduced.

Norwich’s results have been really impressive, and you would expect a top Championship club to have strong players coming through, but Cheltenham played Leicester U21s previously and beat them 6-1.

They did lose to Swansea U21s 4-3, so that shows what those teams can do.

Norwich are showing signs that they could be one of the U21s teams to do really well in this competition. I don’t think any U21s team has ever got to the final before, so it’s great for those players to get that experience.

They’ll see more than just the result, but they’ll certainly want to win and be in it to impress. We’ve seen lads from the likes of Everton, Leicester and Swansea play against Cheltenham in this competition and a few years later they’re Premier League regulars, so that shows what it’s all about.


Norwich City's final EFL Trophy group stage match against Cheltenham Town on Tuesday, November 10 has been moved back an hour.

The defeat means that Norwich will still progress to the second round of the tournament, but will face an away tie against a team that topped their group.

City had the first chance of the game when Matthew Dennis was crowded out inside the 18-yard box. He still managed to work the ball back to Tyrese Omotoye, whose powerful shot was saved by Scott Flinders diving down to his left.

As the sides exchanged possession, the first half became one of few chances, at least until the 27th minute, when Grant Horton was brought down on the edge of the area. Ellis Chapman drilled the free-kick low into the box, but the Canaries cleared the danger.

Reuben Reid, scorer of all three of Cheltenham's goals so far in the competition, had the next effort, heading back across goal a cross from the left wing but seeing the ball sail wide in the 32nd minute.

The Canaries struggled to get a clear sight at goal as the first half progressed, the final ball not quite meeting the intended recipient on a handful of occasions.

Early in the second half, Cheltenham gave the ball away to Dennis in a dangerous area. The City forward managed to get a shot away, but the hosts put it out for a corner which amounted to naught.

The Canaries came closer in the 54th minute, as Josh Giurgi found William Hondermarck in a central position. The latter flicked the ball onto Omotoye who shot on his left foot from a narrowing angle, forcing Flinders into tipping the ball onto his post and wide.

Omotoye's next effort was less problematic for Cheltenham, performing a few step-overs on the right wing before cutting inside and shooting well wide on his left foot.

The visitors continued to look more likely to open the scoring, getting behind the Cheltenham defence in the 66th minute. Giurgi darted down the right wing before putting the ball across the face of goal, where it met Hondermarck whose shot was saved.

At the other end, Lloyd did get the first goal of the game moments later, George Lloyd finding himself through on goal and shooting past the onrushing McCracken for 1-0.

Cheltenham continued looking for the second, Alex Addai finding Tom Chamberlain on the edge of the area, the latter having his shot pushed over the bar by McCracken with just under 20 minutes remaining.

City responded through Dennis moments later, who came in from the left wing to smash a shot on goal from distance, but Flinders was equal to it with a dive to the right.


Norwich City's final EFL Trophy group stage match against Cheltenham Town on Tuesday, November 10 has been moved back an hour. 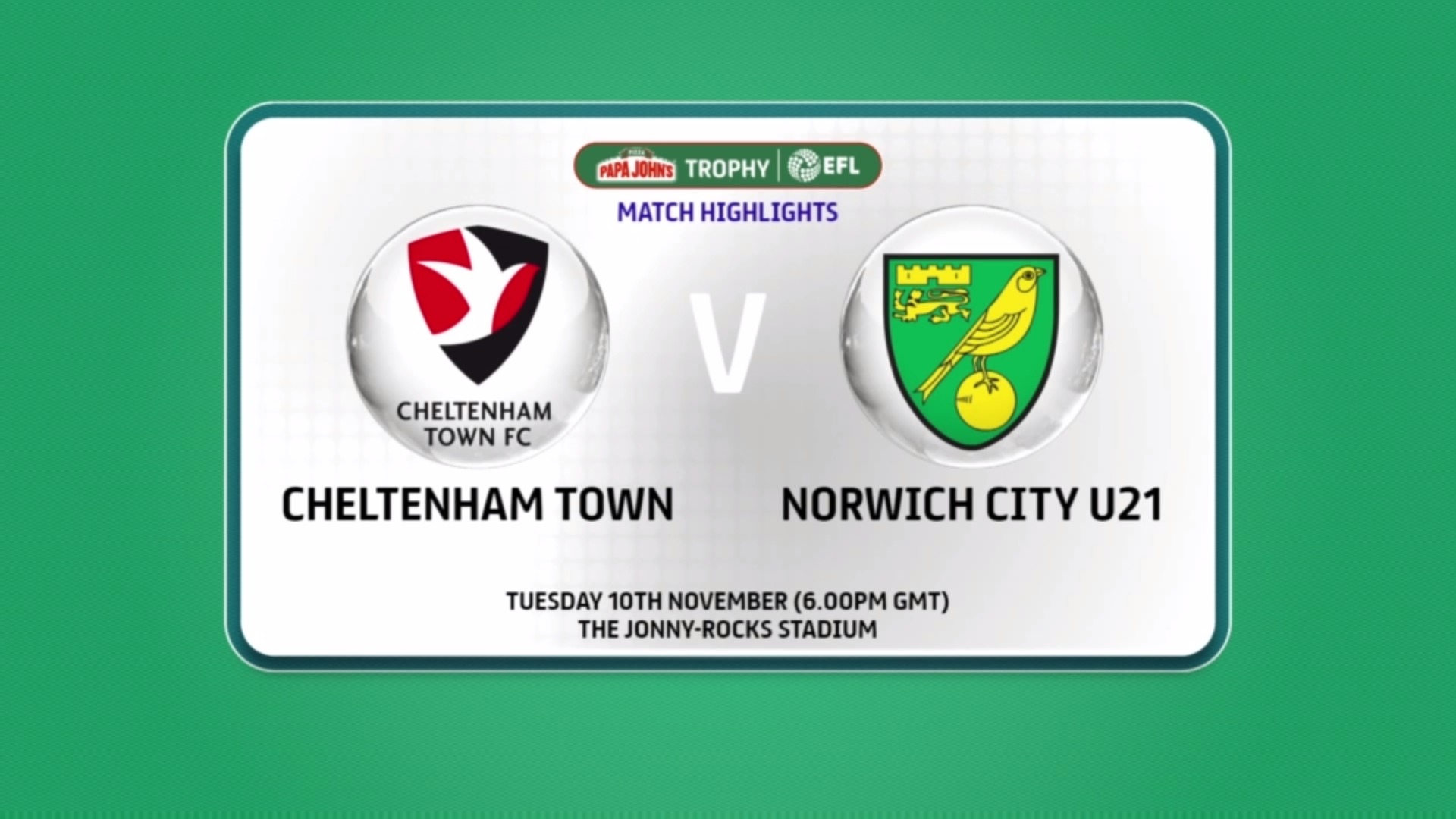 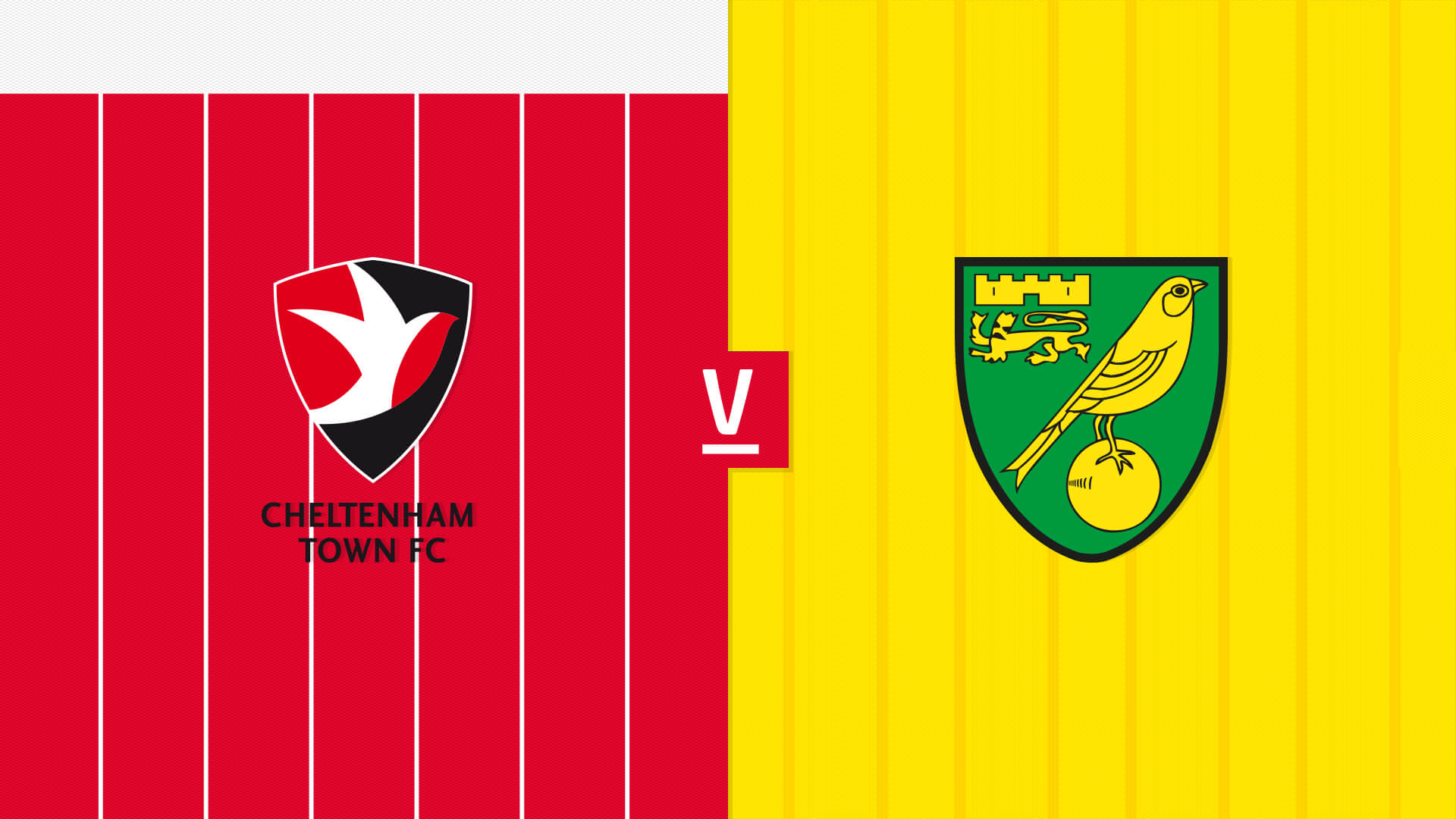 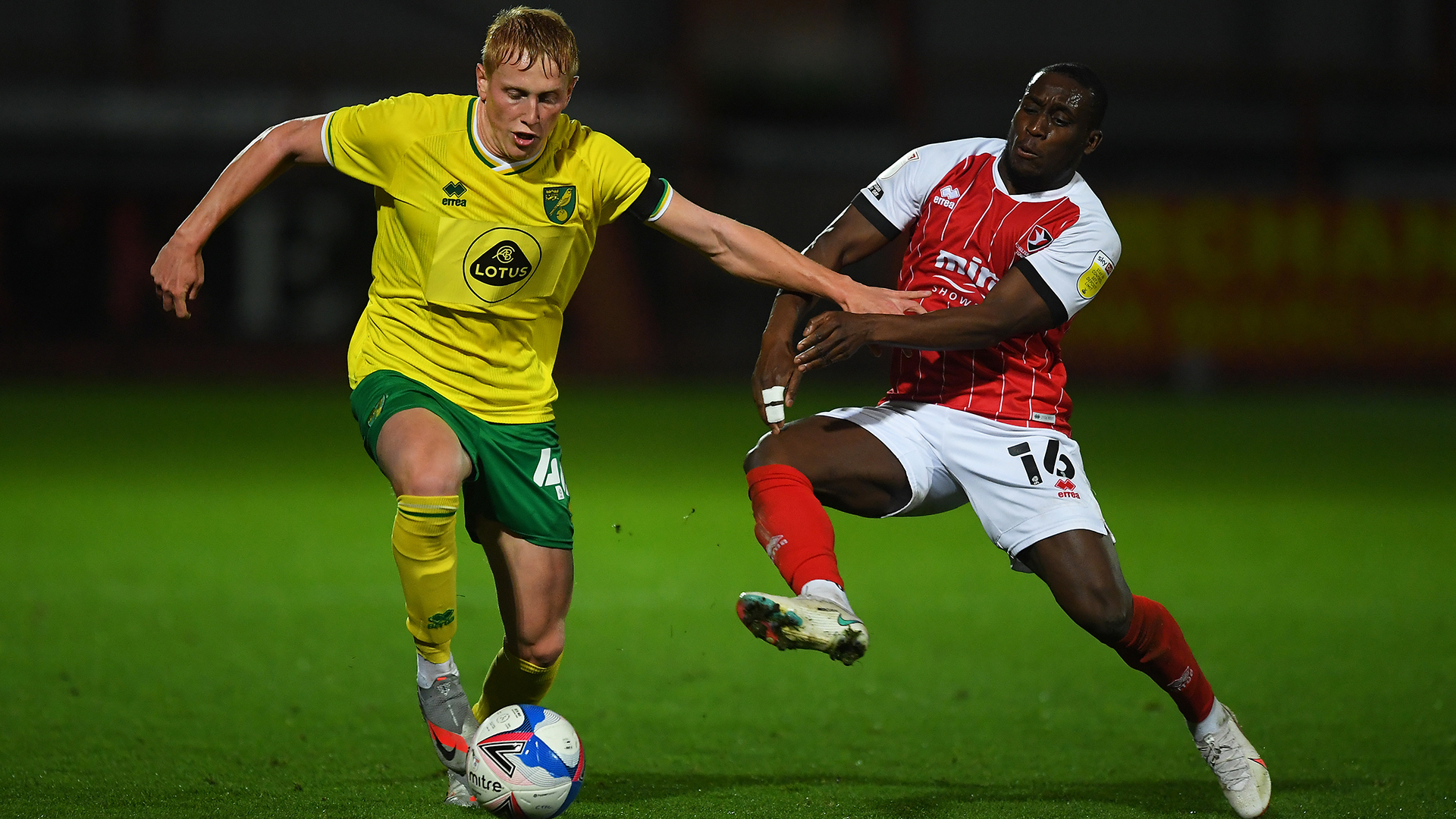